Aloe, is a genus containing over 500 species of flowering succulent plants. The most widely known species is Aloe vera, or "true aloe", so called because, though probably extinct in the wild, it is cultivated as the standard source of so-called "aloe vera" for assorted pharmaceutical purposes.

The genus is native to tropical and southern Africa, Madagascar, Jordan, the Arabian Peninsula, and various islands in the Indian Ocean. A flowering Aloe is something to see with their beautiful candle aubra flowers.

This hybrid has a habit of flowering throughout much of the year; in fact in some areas it flowers virtually non-stop! Even without flowers the plant is quite attractive, with its bluish-purple cast and its symmetrically placed red teeth along the leaf edge.

This small aloe produces rosettes to under 1 foot tall and wide with 6 inch long deep green lance-shaped leaves that have vibrant dark raised red markings, some soft but spinelike, down the center and along the leaf margin. The flowers, which first appeared for us in fall, are reddish pink.

A stunning brightly-variegated plant that grows to 18 inches tall by about 2 feet wide with leaves that are 3 inches wide at the base and taper gently towards the tips. They are dark green in color but so heavily marked with a pale greenish-cream color, that the leaf looks to be all this color with zigzagging green horizontal bands. Mature plants blooms over a long period with dark reddish orange flowers rising on a delicate branched inflorescence from fall through spring.

a moderate grower in speed. Has orangish color edges and small bumps on the leaves. It is a smaller aloe and its contrast in colors have people buying it for its beauty. It forms beautiful red flowers. 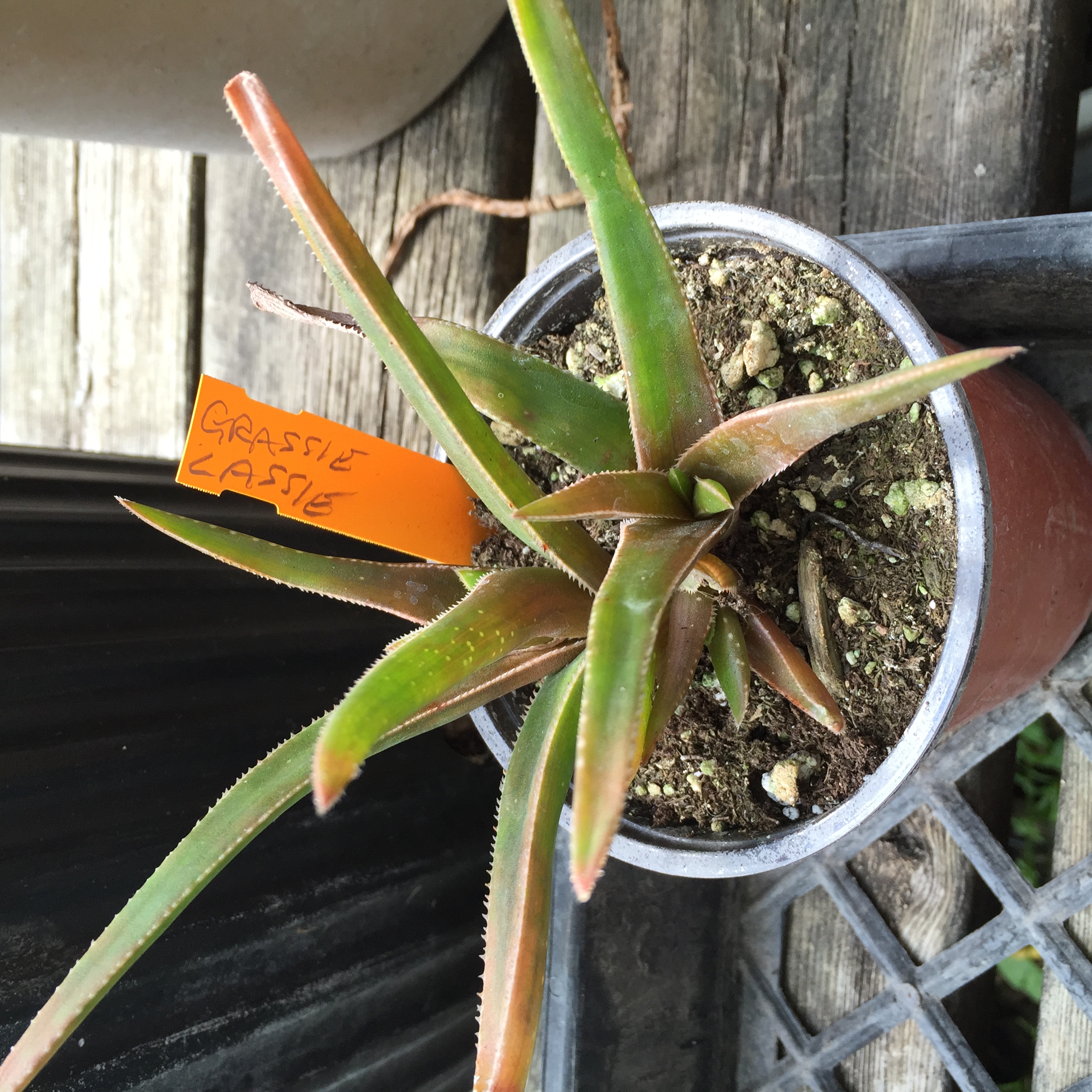 This small clump-forming aloe grows to about 1 foot tall with deep-green, narrow, grass-like leaves that turn a bronze color in full sun and and have fine whitish teeth along the margins. Through much of the year the bright orange flowers rise above the foliage to about 2 feet tall.

Aloe longistyla is a dwarf aloe, characterized by its exceptionally small rosettes. Plants are stemless, usually solitary but may well have 2 or 3 rosettes. The densely crowded, greyish green leaves have a conspicuous waxy layer on their surfaces. The leaves are lanceolate, up to 150 mm long and 30 mm wide near the base. There are firm white spines of up to 4 mm long on both surfaces and rows of these spines can also be seen along the leaf margins.

A rosette forming succulent to 8 to 12 inches tall by 1 foot wide with rough-textured knobby narrow 4 to 8 inch long leaves with soft tiny teeth along the leaf margins. The new leaves emerge a dark green and quickly get dark reddish highlights and if in enough light turn a dark purple color that could be described as midnight black. The 18 inch tall inflorescences emerge in summer to hold pale orange flowers.

a small, offsetting colorful Aloe hybrid by Kelly Griffin. Leaves are overall an ivory color, that blushes pink, and are textured with ridges and protuberances of darker pink and green, with darker pink margins.

(Little Red Riding Hood Aloe) - A very attractive smaller clumping aloe that grows to less than 1 foot tall with many densely-clustered 12 inch wide rosettes of medium green, attractively spotted leaves that arch outward then slightly down near the tips and produce 2 foot tall branched, flat-topped inflorescences of flowers that are orange in bud with pendant flowers opening to show pale yellow interior and petals

The plant's upright leaves (to eight or ten inches) grow to form a clasping or cupping rosette and are completely covered in raised white semaphore-like dots and dashes!

A nicely colored low-growing aloe that suckers to form clumps of rosettes to 20 inches wide on short stems to 10 inches that lie flat to the ground. The stiff shiny leaves are colored greenish yellow to bright orange red often with some white spotting when young and stiff spines along the margins.